Nawres Arif taught himself digital 3D modelling from a photocopied manual, years before he had a computer.

He set up Basra’s first (and only) makerspace in his family’s driveway and so impressed the organisers of MIT’s Arab startup competition this year they let him compete remotely.

In short, Arif is an impressive guy: he’s Iraq’s most influential ‘maker’ and one of the entrepreneurship ecosystem’s biggest supporters.

To hear him tell it, the road from completing a pharmacy degree in the late 1990s to building a motion-capture glove and aspiring to compete in the Megabot robot wars was deceptively easy.

But his story is also a study of what Iraq’s entrepreneurs are up against: travel restrictions, negligible funding, and the need for safe places in which to meet and build their dreams.

He is like a super power in Basra… he is extremely [well] connected. – Bilal Ghalib, Global Entrepreneurship and Maker Space Initiative (GEMSI) cofounder

To tell that story it's best to start at the end with Arif startup, I-mimic. It is a 3D motion-capture suit that uses 3D Studio Max design software to build digital animations and could - theoretically - be used to control giant robots.

It's his main project and, if he can drag himself away fom the day-to-day management of Basra's makerspace and appearance requests for international events, what he wants to send more time on in the future.

Arif, who says the full suit could be finished in six to 12 months, had the idea back in 2010 but the process to get there began years earlier.

By the late ‘90s he’d finished a pharmacy degree, turned away from a career in medical research, and continued to tinker as international sanctions on Iraq began to bite.

“I was thinking about two designs for everything: a modified design and a design for the materials I could get, “ he said. “Especially at that time even the government couldn’t find material for manufacturing and many things.”

The foundations of I-mimic (and Arif’s spiral into full-blown maker) was a bootleg, black and white copy of a manual featuring “this new software doing things with a mouse”: digital design-ware 3D Studio Max. 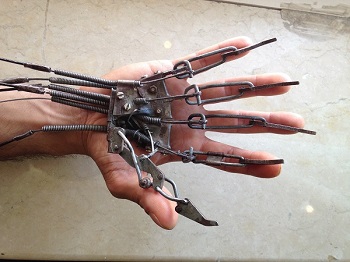 Fascinated, Arif would spend the next 10 years studying the way it worked, and another five using it to develop I-mimic.

Practically applying that knowledge, however, would be tricky for the first few years: he only bought his first computer in 2004.

Arif says animation is a “painful process” - it takes hours and can yield some highly unrealistic results because human movement is so fluid - but he’d found a function called MIDI (Musical Instrument Digital Interface) in 3D Studio Max.

A controller, such as a suit, is plugged into a USB port and the body movements are captured by sensors and converted into MIDI data.

Arif uses the sound mixer to make the 3D characters move, as if in front of a camera, and the latest adaptation was to integrate Arduino (a cheap programmable open-source circuit board) so the data provides real-time positioning without having to use GPS.

It’s still in prototype form as money for these kinds of projects is scarce, and as the Basra makerspace takes up an increasing amount of Arif’s time.

This year Arif entered I-mimic into the ideas track of the MIT Enterprise Forum Arab Startup Competition, which finished in April. He flew through the first online round but was refused a visa to Kuwait - only 40km from his home - for the final events. 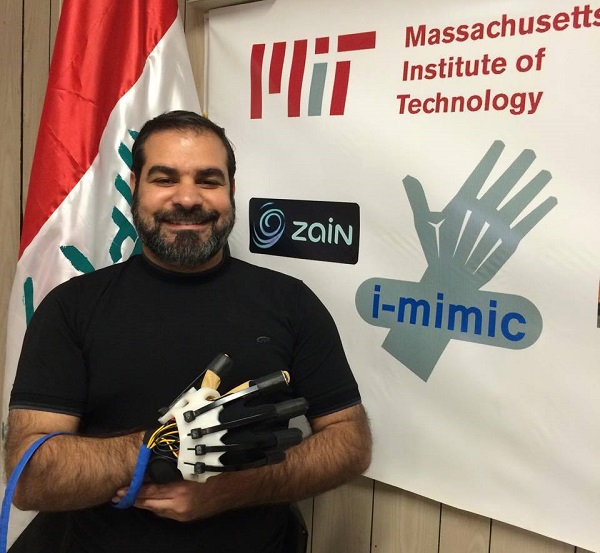 “He’s definitely someone we noticed from all the applicants,” she told Wamda, adding that he was the first Iraqi to get past the second round, “so we’re very excited”.

Despite missing out on the mentoring sessions, I-mimic finished as one of the ten finalists (above).

Arif is aiming to sell the eventual suit as a tool for game developers to create characters, but right now he’s also nudging the project towards something more interesting: controlling giant duelling robots.

Megabots are giant duelling robots controlled by humans inside the structure.

Arif wants to use I-mimic as a bridge between the human brain and the robot body, allowing a person to control the machine’s movements from outside and make them more fluid at the same time.

But for now, that must compete for Arif’s time with the management of the Science Camp.

It was just absolutely amazing what we saw there. It was very cool, it was in a… trailer. I think it was, like, leftovers from the military. – Murtadha Al Tameemi, Facebook engineer and GEMSI member

After the US entered Iraq in 2003, Arif discovered a whole world of makers outside the country. He read about Arduino, 3D printers and laser cutters and, importantly, makerspaces.

So when Iraq’s first coworking space, Fikra Space, was set up in Baghdad in 2012, Arif lent his support and learned. He knew he’d need tools and help to build his prototype, so he called in “seven to ten” friends and by August last year they’d created Science Camp for the hardware enthusiasts of Basra.

The two trailers sit in the driveway of Arif’s family home. One is a classroom and the other is stocked with tools including imported electronics and a 3D printer. There’s even a wireless robotic arm, a thesis project by two women students.

“Alakazam, he manifests these trailers,” says San Francisco-based, Baghdad-born Bilal Ghalib, a makerspace advocate and the man who brought the concept for Fikra Space to Iraq.

“They’re like old US military trailers from when the military was hanging out there. So when I went to Science Camp they had all of these gigantic stickers on them like ‘Freedom isn’t free’, you know all that military kind of stuff.”

Importantly, Science Camp is a safe place within Basra’s turmoil.

“There were two girls in a group of 7 or 10 guys and their confidence and comfort in being there was inspiring. It was really refreshing to see that.”

Basra is more conservative than Baghdad, Murtadha says. To see girls in the camp, breaking conventions about hanging out with men and “geeking out in a Science Camp thing”, shows how safe and socially acceptable Arif and his cofounders have made the space. 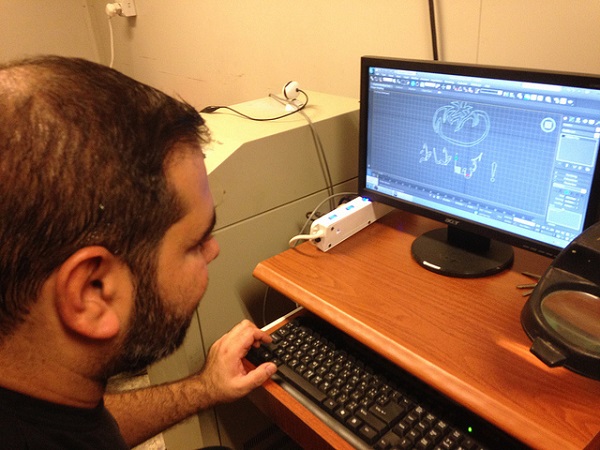 Battling against many currents

Arif sees Science Camp and technology as a way to expose Iraq’s shattered youth to global ideas. Because make no mistake, being neither an entrepreneur nor a maker in Iraq is easy.

Arif has been repeatedly refused visas - Kuwait wasn't an anomally - which means he misses trainings and events in Europe and in the Middle East.

But it's funding and security that are the big two.

Arif says lack of funding is holding back the completion of the I-mimic prototype: the right equipment is expensive. Moreover, as venture and seed investment is virtually unknown in Iraq, Science Camp was financed from the cofounders’ pockets and a Zoomaal crowdfunding campaign.

Most Iraqi entrepreneurship projects haven’t got past the minimum threshold but the latest crowdfunding campaign, in conjunction with Fikra Space, raised $25,211 for new equipment.

The joint effort by Fikra Space and Science Camp meant the project was oversubscribed by 252 percent. (Video via Zoomaal)

The Iraqis Wamda spoke to said security problems were a fundamental aspect of their lives and they considered it less important that funding. But Jason Chen and Kevin Wheeler from Washington-based consultancy The Kaizen Company say the challenge for any entrepreneurial enterprise in Iraq starts with security.

It affects people’s ability to meet or join events, reduces the amount of funding outside investors are willing to commit into the country, and makes risky tech startups less attractive to local funders.

Or as Fikra Space cofounder Salih Zain says: “Entrepreneurship here is amazing. You are the first one, you have no competitors, you are inside the pain that makes you creative. But on the other hand it’s not safe here. You could be killed at any point.”

“Basra is like Kurdistan. It is peaceful,” he says, and the militias are “selective and qualitative”. He manages the potential threat through “smarts and good relations”, ensuring he’s neutral and on good terms with everyone.

Arif is increasingly busy these days. He's also helping to push a law that will recognise Iraqi makerspaces as legal entities and his rapidly rising international profile means he's in hot demand to attend maker events in Europe, the US and MENA. He's a man who MENA will no doubt hear more from in the future.