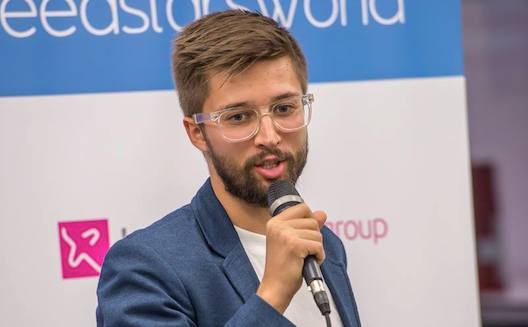 Before his first ever event with startups and investors, Ukranian Igor Ovcharenko spent a lot of time looking at who was attending and ‘matchmaking’ them.

It was a huge success.

Since then he has joined Seedstars World, the global startup competition that focuses on emerging markets, as the regional manager for CEE (Central and Eastern Europe) and MENA.

He was recently in Beirut for this year’s tour to see 11 Lebanese startups pitch, and Wamda sat him down to talk networking.

Your mindset is key. The Ukrainian mindset is that it’s hard to just start talking to strangers. We’re not shy but we need to have a common interest, or be introduced. So you need a solution for this. For the first event I organized I used Presdo [the closed social network] for people to make a connection before the event took place, this way they could kind of get in the mood, so as not to be so shy. People loved it, there were about 2,000 requests for meetings.

It’s like dating. You’ve got to approach investors and startups like a matchmaker. And equally you have to show people your best side, like in dating. For events, I would approach investors first, showing them the startups that were coming, see who might interest them. Then I would show startups which investors were interested, and set up meetings for them. Of course, like with dating, it doesn’t always work out.

Don’t bombard people. Again, like the process of dating, both sides need to be interested in one another. Otherwise, what are you going to talk about? But be prepared, check the list of attendees. Check their portfolios (if you’re looking for investors), their investment criteria, why they’re attending this particular event or conference, and then you can sell yourself from their perspective.

Gossip is useless. Ecosystems can be tiny with everyone knowing everyone. I’ve seen people going to events and talking to only one or two startups, not willing to branch out because of something they heard. It’s bad if they are not wanting to listen to others. People can gossip and say things that are not beneficial to the ecosystem growing. In some regions it can be like a mafia.

MENA companies are not competitive enough for Silicon Valley. They have much less chances, but they all want to go there. That’s kind of a mistake because you don’t have to be in Silicon Valley anymore, you can look to Berlin, or Singapore. You just have to focus on what you want to achieve. In general you can say people are obsessed. The CEE region doesn’t even look at Western Europe, they all want to go to the states. My region [MENA] is the most complicated in terms of politics and situations, it’s crazy.

Be friendly with your neighbors. In such small ecosystems, like we have in MENA, you have to be friendly with your competitors. What we have seen in some of the countries is very sad. Unfortunately people from different ecosystem players, like accelerators or venture funds are busy building ‘walls’ between themselves and their partners, making it impossible to work with partners like us.

An example is if I work with accelerator X, accelerator Y will never be partnering with me and the reason may be as stupid as just personal distaste. That brings only harm to the whole ecosystem itself. Instead of working together on growing startups, these guys are playing war games. The African proverb states: "If you want to go fast - go alone, if you want to go far - go together”.

Be kind. In the MENA region I usually meet entrepreneurs that think that they are the best, that they are the only one eligible to win, that they are the center of the universe, but as we can see in most cases they fail due to their own overvalued potential and ambitions. Being ambitious is good, but not being greedy or mean. My advice is to stay positive, stay fair because in the end of the day investors invest in people, not the projects or technologies. Once you reach common sense with your potential investor on personal level, you are well prepared to succeed with your project.