The language-learning platform Duolingo has launched in the Arab world, allowing Arabic speakers to learn English through free exercises, games and exams.

The app, pictured below, was designed to feel like a game, says Gina Gotthilf, vice president of marketing and communications at Duolingo.

“This attracts users who wouldn’t otherwise be interested in learning a language, who [think it] takes away time they would normally use to play games on their mobile phones,” she said. 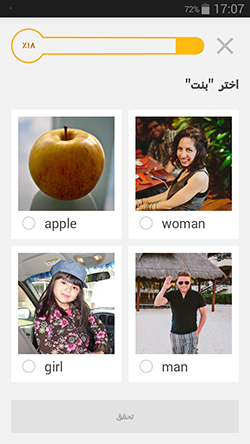 The company was founded in November 2011 by two IT entrepreneurs at Carnegie Mellon University, Luis von Ahn and his graduate student Severin Hacker, with the aim of bringing science-based language-learning access to everyone, regardless of location or finances. The pair researched language books and then used detailed user surveys to develop a curriculum.

For example, to find out whether it was better to teach people adjectives before verbs or vice-versa, they gave 13,000 users one version and 13,000 users another version and measured if the variance led to any statistically significant change in terms of learning, Gotthilf said.

From the app’s English platform, there are 12 beginner through intermediate languages available, including the fictional Star Trek language Klingon – made possible by user crowdsourcing. The language courses under development don’t yet include Arabic, but do include Turkish and Hebrew.

“Our goal is to bring free language learning to everyone. This launch meant we could do an English course through Arabic,” says Gotthilf, pointing out that expensive English courses can be a major barrier to entry for people from poor or rural areas looking to enter certain professions.

According to research from the education consultancy ICEF, Middle East professionals with English proficiency can earn up to twice as much as their counterparts without English skills.

To measure its users’ levels, the company has devised various exams, which is starting to get recognized by some institutions – including Harvard Extension, Carnegie Mellon, the government of Colombia – as a replacement for the relatively expensive TOEFL exam, at a cost of $20 compared with $250. They estimate that around 100,000 teachers out of more than 300,000 users are learning languages from the app. A study by City University of New York found that 34 hours of Duolingo are equivalent to a semester of language instruction at a US university. 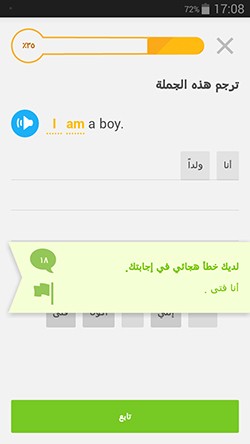 “Today we have over 100 million users and can conduct conclusive tests about how to teach a language more and more effectively based on millions of data points on a weekly basis,” Gotthilf said. “This has allowed Duolingo to significantly increase the rate of knowledge acquisition over time and even to make the curriculum adaptive with the help of machine learning.”

So far, there are no immediate plans to open offices in the Middle East, although they are interested in attending conferences to make local connections and learn more about the regional market.

This is the company’s first step in the region, which it hopes to develop further as it adds more languages in addition to English. The announcement, which was issued at the end of July from the nearly four-year-old firm’s Pittsburgh, Pennsylvania office, comes shortly after receiving $45 million in series D funding from Google, bringing total investment in Duolingo to $83 million.

Duolingo, which has long surpassed its competitor Rosetta Stone, has yet to make a profit, as it uses its early stage period to develop its product and increase its user base, continuing to use no advertisements or data collection.

“We have so much investment, that we’re comfortable growing in the right way,” says Gotthilf.