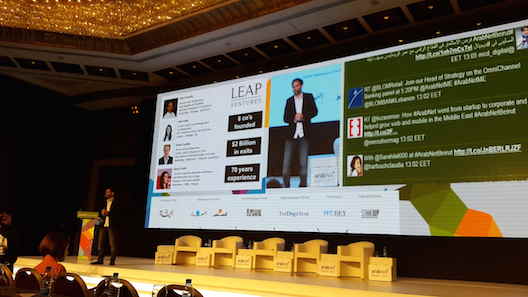 As we previously reported, the focus of the ‘sponsored announcements’ portion of ArabNet Beirut 2015 was largely centered on available funds for SMEs, including an announcement from Bassel Aoun from iSME, the World Bank-sponsored $30 million fund, and Middle East Venture Partners (MEVP)'s Walid Hanna sharing details of their Impact Fund of $50 million.

Topping off all that was Beirut- and Dubai-based Leap Ventures' official announcement of the closing of its first round, at $71 million. Henri Asseily, a founding partner at the year-old VC, said that a second closing was expected before the summer, and that this would most likely increase the size of the fund to around $80 million.

The Lebanese-centric team based out of the Beirut Digital District (BDD), also with an office in Dubai, consists of four partners, each with a wealth of experience - despite their apparent youth. Their website states that they have a cumulative experience of 70 years “founding and exiting companies.”

Asseily himself is the founder of Shopzilla / Bizrate, exited for $569 million, along with Hala Fadel who is the chair of the MIT Enterprise Forum for the Pan Arab Region, as well as being a telecoms business entrepreneurs and the founder of Beirut’s space Coworking+961.

Out of Dubai there is Hervé Cuviliez, founder of Diwanee the digital media company that famously had large shares acquired by France’s Webedia in 2014. Noor Sweid is an angel investor, sits on the board of Endeavor UAE, and founded and exited Zen Yoga, a chain of studios in Dubai. It should be noted that these are the short versions of what these partners have done and are doing.

It was only a year ago that Asseily first announced that Leap Ventures would be fundraising for $100 million. “I was told I crazy, stupid, the usual stuff whenever you start a company, and even a fund like ours is a startup,” Asseily tells Wamda over the phone. “The problem is there and I need to fix it. If I raise 30 million I can’t fix it.” The problem he refers to is that of the lack of funding for SMEs.

Generally the new fund is going to seek investments that range between $5 million and $10 million per company. So, Lebanese companies at growth stage and Series B are on the agenda. No seeds need apply. When it comes to sectors they’re looking to the “technology-enabled and the innovation-led.”

“Last year we looked at the state of the investment landscape in the whole of MENA, and it was very clear that no one was really looking at the complete cycle of the ecosystem,” Asseily tells Wamda.

Citing the need for different people at every stage of funding, Asseily says that before Circular 331 it was very difficult to raise over $4 million anywhere in the Middle East. “How could you even have an exit without raising significant amounts of money, knowing that in the US to have a successful company sell at $243 million they have to raise about one sixth of that in order to do so?”

A change in the tides

And why were these types of funds not being made available previously? Asseily is frank: “No one has the balls to fail, neither Middle East-based investors or entrepreneurs, no one is willing to put the pedal to the metal.”

“The problems I see are both on investor and entrepreneurs,” he says. “The former is always asking how they can minimize the risk, and in a VC that’s not the way to think, and the latter doesn’t have the vision to scale, how or to where.”

For the founder, the continuous worries of investors that someone is going to run off with their money is also puzzling. “How can I answer this question? Even with all the legal framework in place, they still ask, and it’s weird.”

However, his outlook is a positive one, stating that the difference between 2013 and 2015 is like night and day. Significant amounts of money are being made available “and deployed by knowledgeable investors.” For Asseily the Circular 331 is a great achievement and has had a great impact on the Lebanese ecosystem.

Asseily says that within the next two months Leap Ventures will be announcing their first investment, they’ve done the due diligence and everyone is complying with the Circular 331 requirements.