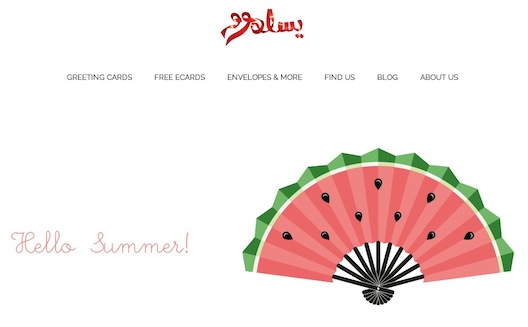 Update: As of September 29th, Yislamoo has reached its crowd investment goal on Eureeca. They have not only reached their target of $71,300 but they are now open for ‘over funding’, so there is still opportunity to invest.
These days, someone asking for stamps or stationery is about as common as someone asking for change to use the pay phone. But the rarity of writing and sending a hand-written note, and the even rarer pleasure of receiving one, makes it all the more special.
To serve these letter-writing romantics in the region, Amman-based graphic designer Rasha Hamdan has brought to market cleverly designed cards and paper in a contemporary Arabic style. During her market research prior to launch, she didn’t find anything close to the product she envisioned: “If there was something in the shops it was old school,” she tells Wamda, “old fashioned and restricted to religious holidays.” For Hamdan there was a real gap in the market when it came to finding cool and witty cards in Arabic that could be used to commemorate birthdays, new babies, Christmas, Valentine’s Day, etc.
So in 2011 she set to work. With her background in corporate design, coming up with some initial designs wasn’t a problem. Other designers were skeptical about whether her idea could work, but when she started shopping her 10 prototypes around Amman boutiques, the owners were enthusiastic. Yislamoo was born.
Hamdan is very clear about the image she wants to present with Yislamoo. “The idea is to be contemporary,” says the entrepreneur, “to be reflective of the spoken language, to show the wit of the people of the Middle East.” Defying the stereotype of the social media generation, Hamdan has found young people to be her biggest audience, but still, she says, “the social butterflies of the older generation are also slowly coming on board.”
But despite the enthusiasm of Yislamoo fans, it’s at times been a rough ride. It was the business, rather than the creative, side of the venture that presented Hamdan with her first hurdles. “I have the backbone for design but not for anything else,” she says. Despite this, Hamdan has managed some difficult pivots over the course of the company, including refocusing on B2B sales, as well as realizing – and leveraging – the importance of brick-and-mortar business for a model like Yislamoo. 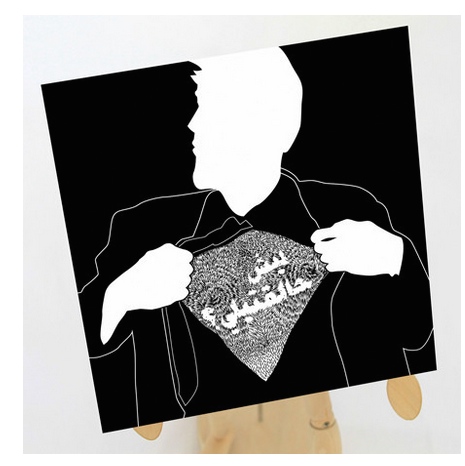 Pivoting from B2C to B2B
Yislamoo, which now employs five artists and several outsourced copywriters to draw up cards, first attempted to sell online in 2012 but faced setbacks with the available platforms and developers. The online store has been in its current form since late 2013.
Shipping presented an early challenge that Yislamoo has addressed, at least on behalf of the buyers. “The cost of shipping a card costs more than the actual card,” says Hamdan. As of six months ago, the site decided to institute a policy of free 14-day shipping for all online orders. Since then, according to Hamdan, sales have increased by 50 percent. Still, currently sales of cards to individuals through the site makes up just 10 percent of business. “From customer feedback we gathered, it isn’t a good ROI route selling only to individuals.”
And how do they cover the shipping cost? “Because we're offering the full retail price on the product, we maintain the cut we were giving away for wholesales or consignees […] this of course grants us a lower margin for now, but as volume grows we'll reach a better deal with postal service.” The loyalty of their customers, according to Hamdan, also helps offset shipping costs; people who have ordered one card often return and order more at once.
Another struggle for Yislamoo has been breaking out of Jordan, where the cards are now available in 30 stores, into offline boutiques in other MENA markets. “Breaking into the GCC market has been a challenge but we are now available in one store in KSA and Dubai, and this has all happened just in 2014.” 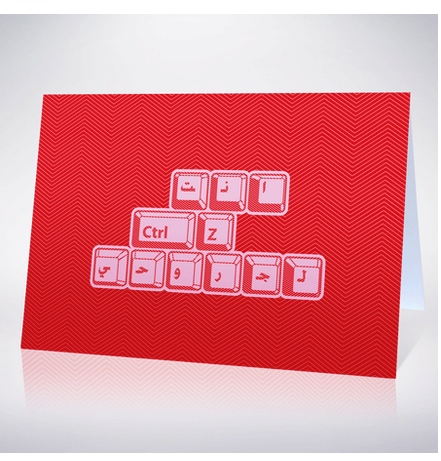 Refocusing on brick-and-mortar
Justifying her decision to focus on getting Yislamoo cards into regional boutiques, Hamdan is realistic about ecommerce versus brick-and-mortar: “I think that unless online shopping can recreate the experience of going into a shop and touching the product, it’s always going to be the more popular way to shop.”
Hamdan has found that a lot of customers, instead of buying online, will simply ask a friend who is in Jordan to pick up cards for them. Reflecting this, the Yislamoo team is beginning to focus its efforts more on offline retail rather than ecommerce.
The traffic data on Yislamoo’s website backs up this decision. After the home page, the most visited page on the site is the ‘find us’ tab, proving that customers are still more interested in in-store shopping despite the free shipping option.
Keeping close track of the trends has allowed Hamdan to spend Yislamoo’s limited marketing budget strategically: “We’re using [the budget] to target stores to stock the cards; when it comes to online marketing, we don’t deem it necessary to make the expenditure.”
Next steps
Keeping things afloat while dealing with these hurdles has been a learning curve for Hamdan, who also has a separate design practice. While her family as a whole put together the capital to launch Yislamoo, Hamdan says: “You need to have a black belt in bootstrapping…. The infrastructure in MENA to support a successful online business is still evolving.”
But looking beyond bootstrapping, Yislamoo has just embarked on a crowdinvesting campaign with Eureeca, launched July 15th. The campaign is still in its early days, but Hamdan is confident that Yislamoo fans will be excited at the opportunity to invest in Yislamoo in exchange for shares.
But the team isn’t just relying on confidence to drum up a successful Eureeca campaign. In weeks leading up to the launch, Yislamoo began sending out announcements for the crowdinvesting campaign in an attempt to secure early commitments, which we’ve seen to be key to success on Eureeca in the past.
Funding from a successful Eureeca campaign will give Yislamoo the chance to take the company in new directions. “We want people to come to Yislamoo for anything to do with birthdays, for example, the decorations, the balloons,” say Hamdan, “all with a regional flavor, in Arabic and with a quirky sense of humor.”
A huge fan of putting pen to paper herself, Hamdan is determined to find the right balance between technology and “old school romanticism…. the whole point of Yislamoo is to make the recipient feel special.”