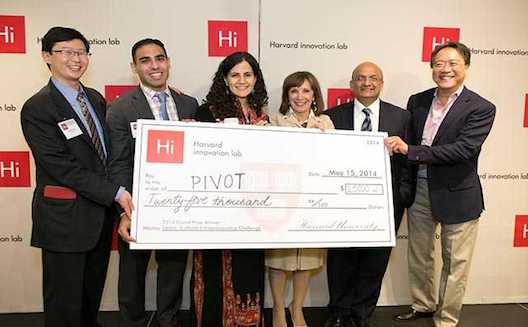 Among the Palestinian diaspora, across the region and world, the danger of forgetting one’s history is very close to the surface, especially as the nakba generation ages. The PIVOT project, an interactive app that stores images, videos, and information on ancient and modern Palestinian history, is a direct attempt to combat the fear of forgetting – and one that seems to have a chance of success.

The Palestinian PIVOT project placed first at the Dean's Cultural Entrepreneurship Challenge organized by the Harvard Innovation Lab in May, winning a cash prize of $25,000 USD in addition to access to a co-working space and mentorship.

Neil Doyle, Assistant Director at Harvard’s Innovation Lab, says that the project represents an innovative approach to solving the fundamental problem of art’s sustainability, along with a new way to increasing cultural and social impact. Moreover, the team has the experience, skills, and commitment needed to implement the plan.

The adventure began in September 2013 when founders Asma Jaber and Sami Jitan joined the Venture Incubation Program at Harvard’s Innovation Lab, which provides a co-working space, resources, and mentorship to develop projects.

Having passed through the stages of the competition, Jaber remembers the night their victory was announced: “It was important to be able to talk openly about Palestine, the Palestinian history, and destroyed villages. It was a fantastic day for the preservation of Palestinian history at Harvard.”

“The source of our inspiration to build PIVOT was the death of Asma’s father and her desire to do something to keep her relationship with her homeland alive,” Jitan told us. Asma says that her father had always helped her value the places around her, particularly during her visits to Palestine. He was always telling her about the villages that had been there and their ancient names. “After his death, I was driving my car from Jerusalem to Nazareth, and I thought to myself that there were no apps out there designed for one to enjoy the region and its history. There was no way to digitally browse history,” she continued.

Explaining why PIVOT was chosen as the app’s name, Jitan said: “Since the user’s experience indicates going around a location through time, we decided to go for this name.”

How does PIVOT work?

Jaber explained that as soon as a user download the app, it takes them to a country map with “specific pinpoints” – or what are known as Pivot Points – allowing users to access information about a site. Swiping a finger to the left allows users to go back in time, accessing historical information.

Jitan said that two types of users use the app: those who want to remotely discover cities or countries, and those who use it to know more about where they already are.

As for the content, the team focuses on providing high-quality information. “Some mentors advised us to follow the Wikipedia model, but we needed to control the information. We want all the views of the world, provided that they are validated and significant. It is as if we are archiving the ‘shoe box’ content,” Jitan says. “We want to dive in these pictures and upload them to the app.”

Until now, Jaber and Jitan have been relying on seed funds and the prize money to develop PIVOT, but they are considering all possibilities to monetize their project, including adopting a paid model.

Many initiatives are working to preserve the Palestinian memory, such as Palestine Remembered and All That Remains, which collects pictures, or even the iNakba app that offers a similar service to PIVOT. But, whereas iNakba depends on geo-references of villages and cities that were destroyed in Palestine, while PIVOT seeks to provide information about villages and cities throughout the world. Indeed, it’s in the rest of the world that might be a preferred target market, as Palestine itself is already quite well served by iNakba.