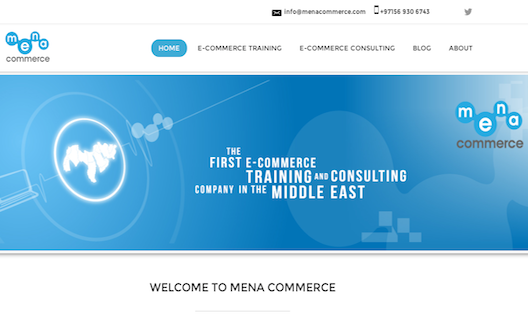 At this point, it wouldn’t come as a surprise to learn that Moustafa Mahmoud eats, drinks, and sleeps e-commerce, in addition to having lived it day in and day out since 2005. Having studied how information security applies to the e-commerce industry in graduate school at the University of California, Mahmoud became convinced of its potential for the region, and moved to Dubai to put what he’d learned to work.

Four e-commerce startups later (including ShuGeek, which Wamda recently profiled, and jewelry e-commerce site Xeswar), he launched yet another venture in March called MENA Commerce. But this time, the product he’s selling to the UAE entrepreneur community is the e-commerce know-how he and his team of eight have accumulated in their various experiences in the industry.

I spoke with Mahmoud earlier this week from his office in Dubai about some tips for e-commerce entrepreneurs in the Emirates and the region. He had advice that’s basically universally applicable – such as embracing failure, and communicating promiscuously among your entrepreneur community – but one tip really stood out as something even Wamda doesn’t hear often.

The way to surmount the UAE’s – and the region’s – payment challenges, says Mahmoud, is for merchants to dump cash-on-delivery, regardless of what’s convenient for customers.

This is a position on which he’s quite adamant. “COD as a concept is not e-commerce in any way,” he says. “E-commerce means commerce transacted electronically,” whereas the cash-on-delivery model allows customers to pay upon delivery – and that’s only if they like the product they’ve ordered.

“In the UAE, the majority of issues e-commerce owners face is that COD is not a payment method; it’s a promise to pay with no commitment,” Mahmoud continues hotly. The COD system, he says, exposes startups to a huge number of avoidable hassles involving cash flow, shipping, warehousing, etc. that e-commerce companies in Europe and the United States never have to think about.

“Everybody says that COD is so prevalent in the MENA because of a lack of education about credit cards,” Mahmoud says. “I couldn’t disagree more.” People in the UAE not only have credit cards, he says, but they use them every month to pay their utility bills, buy their plane tickets, etc. “People [in the UAE] have credit cards but they choose not to use them… because COD is more convenient.”

So then, you might ask, won’t customers in the Arab region shun e-commerce sites that don’t allow COD? Not if the product it good enough, Mahmoud says. “Small merchants believe they have to enable COD in order to get customers,” he says, “but it’s not true. He points to e-commerce electronics giant JadoPado as an example of an e-commerce business that has succeeded without sacrificing at the COD altar, by offering good products, reliable delivery, and lots of help section entries about secure payment.

If e-commerce merchants quit COD cold turkey, by extension their customers will too. “Only [after merchants stop allowing COD] will we witness true e-commerce in the region.”

It’s this advice and more that he’s now shilling at MENA Commerce. The startup has three revenue streams: trainings, consulting, and research. There are two seminars currently on offer, designed for companies looking to revamp or create an e-commerce department, as well as for individuals who have an idea for an e-commerce startup and want to learn how best to launch it. MENA Commerce’s other revenue streams are from private consultations, and a research arm, “purely focused on producing actionable intelligence for e-commerce,” says Mahmoud.

But it’s not all for-profit. The community arm of the venture – launched last December with the no-nonsense name of E-commerce in the UAE – seems to have struck a special nerve in the UAE entrepreneurship ecosystem, where people from all over the region and world are flocking to get their businesses off the ground. MENA Commerce has so far attracted over 500 community members, from word-of-mouth promotion only (they haven’t engaged in any advertising or marketing). Also, where the first class drew 20 participants, the most recent had 120. “There weren’t enough seats for everyone!” Mahmoud recalls proudly.