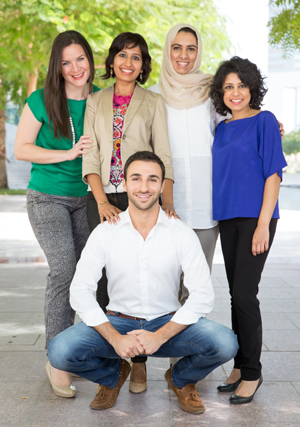 “People believe that innovation thrives in every other part of the world… but it also exists here, and we want to be a platform to support it.” With these few words, Natasha D’Souza outlined the mission of the Dubai chapter of the global Acumen initiative, a non-profit global venture that uses entrepreneurial approaches to solve the problems of poverty, that gives anybody the chance to start a chapter, wherever they are in the world.

Hoping to help nurture the seeds of ideas that many entrepreneurs in the region have planted, Dubai+Acumen organized ASE 2013 (the Acumen for Social Enterprise Business Plan Competition), to offer financial support and mentorship to social enterprises in the UAE. The 2013 competition offered a grand prize, sponsored by event partner V7 Capital – worth 100,000 AED (just over $27,000 USD) – as well as a 50,000 AED (around $13,600 USD) prize for sustainability, sponsored by Dow Chemical, another event partner.

Dubai+Acumen is a volunteer-based initiative, whereby people gather in coffee shops, co-working spaces, or even in their homes to discuss their ideas. In a Dubai coffee shop, I met three of the five chapter leaders: Natasha D’Souza, Leigh-Ann Lanier, and Christine Azavedo. They talked about their goals to bring about positive change through investment in the social enterprise ecosystem.

The chapter leaders organized ASE’s second edition in October 2013, this time with a new look. D’Souza explained to me that “we wanted to change the structure of the competition by giving, in addition to the prizes, mentorship to the finalists and follow-up to the winners in their future adventure… However, the main idea of the competition was the same. Every individual or group who has a social idea or project, regardless of their stage of progress, participates in the mandatory workshops series that helps them develop their project and set a business plan. In the next stage, all who completed the workshops pitch their project to a panel of judges.”

The level of interest in the first workshops surprised the Acumen+Dubai chapter leaders: there were around 80 people from different backgrounds, ages, and industries. Of these, only ten finalists were selected for the Grand Finale.

According to Lanier, the judging panel chose the two winners based on the fact they presented “an idea [that’s] needed by the market, sustainable, and financially viable.” The Grand Prize winner was Green Truck, a startup co-founded by Diya Khalil and Timothy Paul which aims to provide direct recycling transportation services for neighborhoods in Dubai. Azavedo added that “Green Truck is conducting meetings with V7 Capital [about a possible incubation], and will soon launch a pilot project.” Green Shine, a facility providing organic and water-free car washes started by Elizabeth Kuruvilla, won the Dow Prize for Sustainability.

Other projects also drew the attention of the judges, including Maska, a gift wrapping service, whose founders will be mentored for six months by a member of the judges’ panel, and the GYEM (Global Youth Empowerment Movement) will be incubated by V7 Capital.

Despite the difficulties of getting funding in the region, especially for social enterprises based on volunteers, Lanier asserts that “Dubai+Acumen has had lots of support. Photographers and graphic designer have volunteered their time and the DIFC (Dubai International Financial Center) [donating the use of a] venue.”

The volunteer aspect of Dubai+Acumen makes it a rare organization, but not totally unique. The C3 accelerator also offers pro bono mentorship and support to try and make a difference in the world. But this Emirati organization is not a competitor, Lanier insists. “We’re part of a global network. Therefore, we complement each other because our mission is similar.”

The three chapter leaders agreed there is a “growing appetite” for social enterprises in the UAE. But success for Dubai+Acumen is not yet at hand. Current regulations regarding how companies are set up aren’t tailored to social entrepreneurship companies, and Dubai+Acumen’s ability to attract investors, so as to achieve sustainability and build a broader social network, is not very well developed as of yet.