Venture capital in the Middle East and North Africa is on the rise, according to the latest MENA Private Equity Association report.

The hope is that the rising tide of startups can alleviate the joblessness that nearly 100 million young people in the region face (nearly 25% of the population); after all, in markets like the U.S., all net job growth occurs only through startups, according to the Kauffman Foundation.

In the Middle East, it will take more than startups alone to create the estimated 50 million new jobs needed to sustain productivity over the next 10 years. Government, historically one of the largest employers in the Arab region, is already on the task; in Abu Dhabi, the government plans to create 600,000 new jobs for Emirati nationals in the next decade. Currently, one in five Emirati nationals is unemployed.

The MENA PEA report offers a positive look at the ecosystem, revealing that not only is investment on the rise, especially in ICT-based companies, but so are exits. Have a look at the 7 graphs you need to read to understand current investment trends in the Arab region. 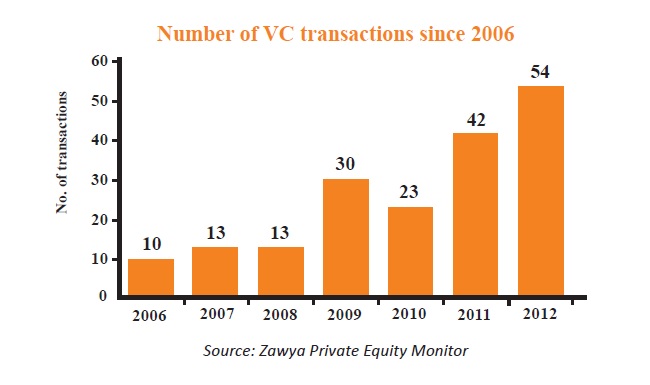 2. More VCs raised in 2012, but they secured less funding

From 2011 to 2012, the number of VC firms raising funding increased from 9 to 11, and yet the total amount of investment decreased from US $612 million to $308 million. The report attributes this decrease to the “lingering effects of the global financial crisis, and the continuing political instability in key markets such as Egypt” (page 35). 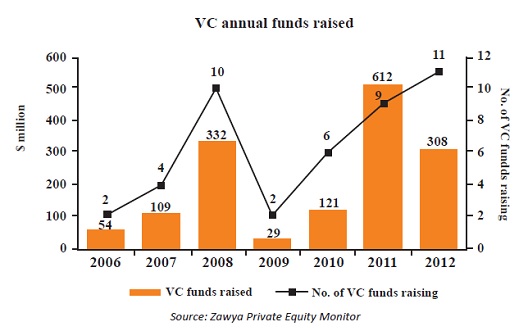 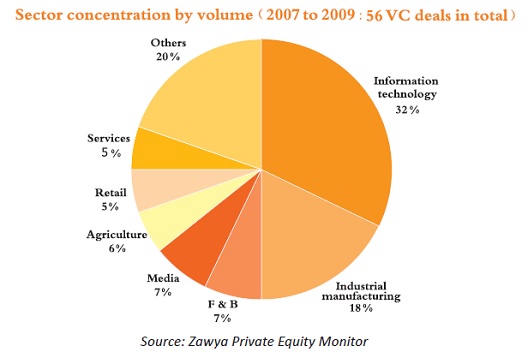 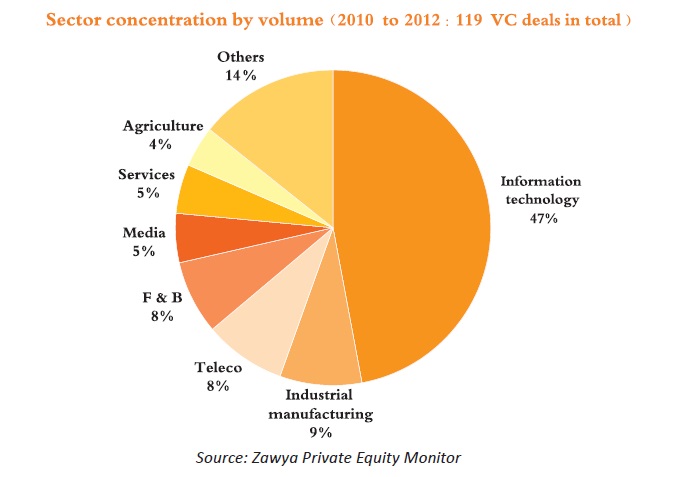 4. Proportionally, VC deals decreased in Egypt and the UAE, but increased in Lebanon and Tunisia

Although the total number of deals has increased in Egypt between from 2007 to 2012, political instability caused investment in the country to shrink proportionally, especially in 2012 (although we're not sure why two pie sections are attributed to Egypt). Interestingly, Lebanon’s VC activity has seen a large increase from three transactions in 2007 to 2009 to 25 from 2010 to 2012, and Tunisia's has grown considerably. 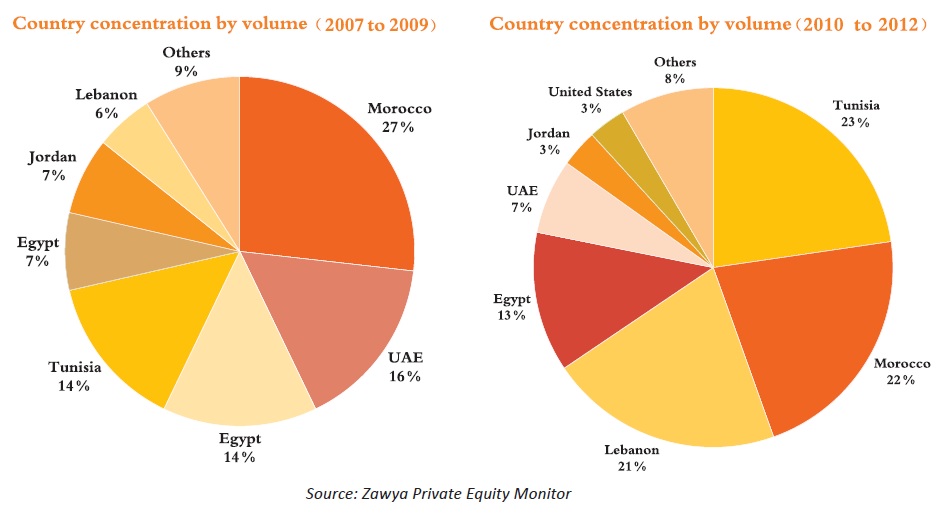 When it comes to exit opportunities for VCs, the report asserts that “the impact of the global financial crisis on liquidity, valuations and investor appetite has resulted in longer than anticipated holding horizons for VC investments” (page 36). But things are beginning to change; the number of exits completed from 2011 to 2012 increased when compared to 40, compared to 29 exits completed from 2009 to 2010.

As the region’s economies stabilize and market liquidity continues to improve, the report expects that exits will become easier and more frequent. 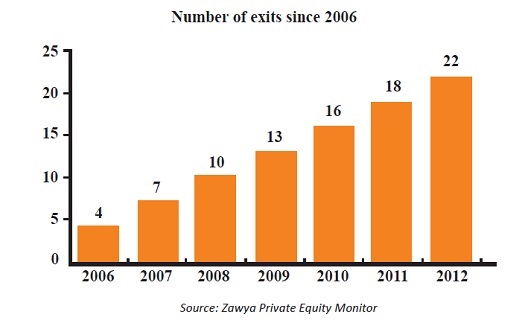 When it comes to looking at in-country policies driving investment in the Arab world, the report reveals that:

The UAE is encouraging entrepreneurship, for nationals

With one of the highest rates of GDP per capita in the world, the UAE has emerged as a hotbed of entrepreneurship, albeit a difficult one. While the government has done quite a bit to support entrepreneurship for UAE nationals, more could be done to reduce the burden of registration costs in free zones and make visas easier to obtain for non-UAE nationals.

Although Saudi Arabia Saudi has some of the lowest total entrepreneurial activity rates in the region, with only 4.7% of the adult population actively involved in a startup, according to the Global Entrepreneurship Monitor, the government has been fostering a healthier ecosystem by establishing a VC fund, regional incubators, entrepreneurship centers, angel networks, and SME loan programs, the report notes. Yet with rising unemployment rates, which reached 12% among university graduates in the Kingdom in 2012, much work remains.

Egypt, with the region’s largest population, and a young one at that, has several natural entrepreneurship enablers including “natural and agricultural resources, diversified economic sectors, skilled and abundant labor force, and eagerness to develop new ideas and home-grown private businesses.”

While the biggest focus has been in the ICT sector, there is a growing interest in other sectors such as manufacturing and energy. But political uncertainty has put a damper on VC interest, reducing investment there in 2012 from that of 2011.

Jordan has one of the region's strongest startup ecosystems, for now

In 2011 and 2012, Jordan ranked first in the number of technology deals funded in the Middle East, and second by amount of funds invested, according to the MENA PEA report. Amman is also ranked the tenth best place to start a technology startup in the world, according to Bloomberg. While 75% of all Arabic content online hails from Jordan, the country also has a very strong talent pool, making it one of the “most mature markets in the region for entrepreneurs and venture capital funds.” Of course, recent statistics on the ICT market show a sobering story; some entrepreneurs are even considering leaving the country due to new taxes and costs of doing business (for a full look at the situation, see 5 graphs that explain the ICT sector in Jordan).

For more on investment in the Middle East, check out the full MENA PEA report, for a deeper look at each of these countries, including Egypt, Lebanon and Morocco, and prescriptions for building up the ecosystems in each.