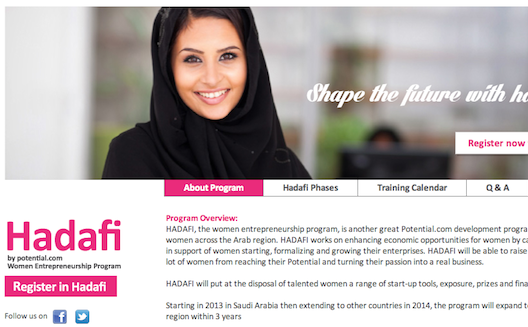 Last week, Dubai-based social enterprise Potential launched Hadafi, a women’s entrepreneurship program designed to empower women in Saudi Arabia. In partnership with Harvey Nichols KSA and Zain KSA, Potential hopes to begin in Saudi Arabia and then scale the program throughout the region next year.

The program, which also counts Al Nahda Society, 3eesho, the All World Network, GloWork, and Qotuf as partners - is "addressed to all Saudi women over the age of 18… who want to either establish a business or grow [an existing one]," Loma Jaber, public relations representative for the project, told Wamda. Any woman can enter her idea into the competition, but as the phases progress, the nascent businesses will be narrowed down by a series of expert judges (yet to be determined). At the end, the three top ideas will win 30,000 Saudi riyals (almost $8,000 USD) to put toward implementing their projects.

Following the blueprint set by Potential, the Hadafi team is also planning to organize four workshops and webinars (part of the Massive Online Open Curricula, or MOOC, model) that participants can livestream. Jaber says that the webinars will “cover several different business models,” allowing viewers to “adapt their ideas to existing models.” Participants will need to attend each of the webinars in order to proceed with the next level of registration, and eventually be entered into the judging round.

This initiative is one response to a widespread desire among Saudi women to hold down meaningful jobs – despite a massive gender gap where women make up 57% of university graduates, yet only 20% of the workforce.

Jaber speaks to this, saying Potential and its partners “want to engage women in the business community, so that they contribute better to the economy. When women know what they want and how to accomplish it, they can be freed from the restrictions of the community and [succeed] in business.”

Sally Afra, Potential's Marketing Manager, echoes her colleague’s confidence in the program’s potential to empower a long-ignored demographic: “Women in Saudi are well-educated, hard working, eager to get into the business community – they have lots of financial power, and are willing to invest in new ideas.”

Stay tuned to this space for updates on the participants, their projects, and the winners.