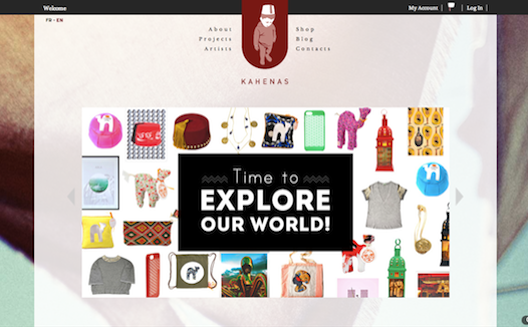 Preserving national heritage is a concern for many cultures today, as globalization causes the production and consumption of similar items around the world. Promoting traditional artifacts has always been a challenge and an opportunity for artists to prove themselves while demonstrating their unique culture.

Charaf El Mansouri is one entrepreneur who understands this need to safeguard Moroccan heritage. Earlier this month, he launched Kahenas, a unique online store that features unique items mixing international design with Moroccan heritage, built by Moroccan designers and artists. His goal is to create a place on the web where young local artists and artisans are given an opportunity to present their products easily to both a Moroccan and a global audience. 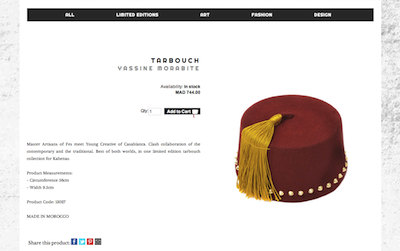 The website itself is worth a visit, as it’s beautiful, modern, proudly Moroccan, universal artsy, and meaningful. The eshop features a large variety of products including clothing ranging from a reimagined Tarbouch, the traditional Moroccan hats, to handbags, iPhone cases, lamps, frames, and more.

El Mansouri’s vision of Kahenas also wouldn’t be complete without a platform for Moroccans to express themselves on a daily basis. That’s why a blog is a large part of the project; here, the site joins a global dialogue, as Moroccans share their perspective on their heritage and its place in the modern world.

A global demand, a local offer

The idea for Kahenas came to El Mansouri during his stay in the U.S., when he used to bring back traditional Moroccan items for American friends, or to showcase at cultural events.

Even if his challenges were “foreseeable,” El Mansouri has still had to overcome many issues to make his vision come true, beginning with finding the right products. In the early days, some artists couldn’t afford to produce their artifacts, so Kahenas covered their production costs. By paying for production, Kahenas could allow artists to take less financial risk, and therefore allow the public to be exposed to many more products.

El Mansouri remains optimistic despite everything the company has been up against. “Each problem allowed us to push harder and get closer to what we wanted to achieve, and most importantly, all the artists we approached were amazingly responsive to the project," he says. "What was enough motivation for us to keep on going for much longer."

Learning to be an entrepreneur

As it faces these challenges, Kahenas is still learning how to solve issues and and adapt its service accordingly.

What helps is that El Mansouri has tremendous support from the artisan community and several sympathetic journalists to thank for the progress the startup has made already.

As an entrepreneur you “realize very quickly that nothing can be done alone,” he explains. Success is always the outcome of everyone’s energy.  “It's amazing to take responsibility for something that, if successful, will be bigger than me or the team," he concludes.

El Mansouri considers himself an emerging entrepreneur, but based on his experience in the field, his advice to other young entrepreneurs is that they will need a lot of patience, since the process takes “much longer than originally anticipated.” He emphasizes that although discouraging people may get in their way, deeming an idea “impossible,” or dictating that it must be done a certain way, those who persevere can create something much larger than themselves.