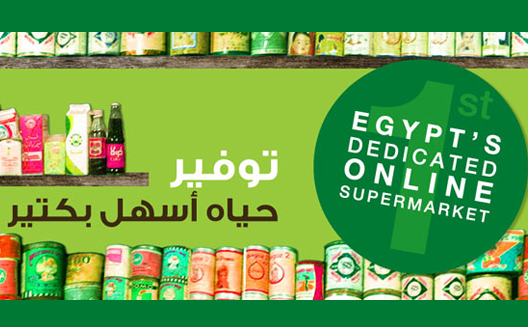 Over the past decade, online grocery stores have been popping up in the U.S. and around the world with relative success. Even Amazon.com caught on and launched Amazon Fresh in Seattle in 2007 to sell groceries online- they are now expanding to Los Angeles too.

The same trend is now making its way to Egypt, the biggest market in the Arab region, letting customers save time on shopping, compare prices between different stores, and search for specific products from their desktop.

New startups in this space are following two distinct business models. The first is a straightforward business model; each company buys products from suppliers and sells and delivers them to consumers, including Alice and Netgrocer in the U.S., and El5odary and Beqala in Egypt.

The second model is as intermediary between buyer and supermarket. In this model, grocery stores bear delivery costs, rather than the intermediaries themselves. These companies sometimes try to secure deals with supermarket chains in different regions, making their profits from a commission on sales. Stores like My Supermarket and My Grocery Deals in the U.S. and Minbetna in Egypt follow this model.

Online grocery shopping spare consumers the hassle of standing in long queues and more easily managing a budget as you can schedule repeat orders or  cancel any of the products in your shopping cart before paying.

These startups in Egypt were only launched within the past few months, but each has some distinct characteristics. Here’s a look at the new players: 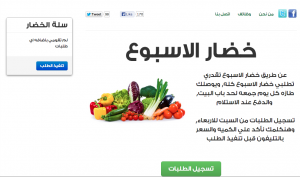 Founder Ahmed Abd El-Aliem, who also created Egyptian job search startup Careerise, is a software engineer who has secured a deal with suppliers in Cairo’s fresh Obour souk market to source stock for El5odary, which means ‘the person who sells vegetables' in Arabic. “High quality is important to us, and so is having the right price. We try not to be more expensive than the small grocery shops in the streets,” said Abd El-Aliem.

Abd El-Aliem realizes that people need to stock up on groceries at least once a week, so his employees monitor recurring orders and check in with customers each week to make sure they don’t need to change their product order or if they’d like additional produce that week. Delivery remains free so far, but they may begin to require customers to buy a minimum amount of products to avoid a delivery fee in the future.

Over the next two months, the startup will be building an online community around the stores, featuring nutritional facts, recipes, and diet recommendations. “Although the market volume is pretty big and the competition is pushing us to innovate, if we’re only delivering orders, without building a grocery community, we won’t survive,” asserts Abd El-Aliem. Currently, the company delivers only to certain neighborhoods including Nasr City, El Tagamoa El Khames, New Egypt, New Cairo, and Sheraton residences. 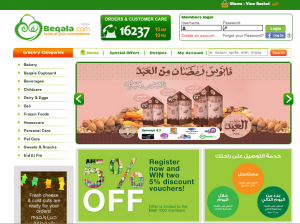 Dr. Alaa Al Gamal, Mustapha Mohrez and Karim Al Tawil launched Beqala this past May, after first coming up with the idea two years ago. Like El5odary, Beqala deals directly with suppliers, and their sleek and clean website is targeting middle and upper class consumers, working women in particular, says Al-Tawil.

He adds that large well-known supermarkets don’t usually consider online sales as a priority because they prefer that buyers come to a physical store as they are more likely to see something they may have forgotten and purchase more. Beqala itself offers all of the major products found in a large supermarket, minus fresh produce because they are waiting to build consumer trust and find adequate suppliers, notes Al-Tawil. Beqala also offers a customer service center and offers three delivery options: “express,” which comes within 2 hours, “normal,” within 4 hours, and the last option can come next day or more; delivery costs vary between US $0.60 and $2. 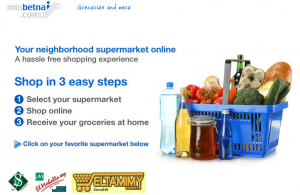 This startup is hoping to fill the gap for stores looking to go online, a sort of e-commerce solution for grocery stores.

Recently launched by Ahmed Zein, who studied Business Management at the German University in Egypt, and funded by investor network Shekra, Minbetna has already been able to secure deals with three major grocery stores. Although the site isn’t fully functional yet, Zein is pushing forward, but admits that taking supermarkets online can be a challenge when they have no previous experience in the space.

Some of the larger supermarkets in Egypt do already offer online shopping and delivery, including Spinneys, Metro and Awlad Ragab, but Zein notes that the products listed online are fewer than those offered in the stores, encouraging consumers to go to a physical location for a full array of goods. Minbetna will be available for consumers located in New Egypt and Zamalek.